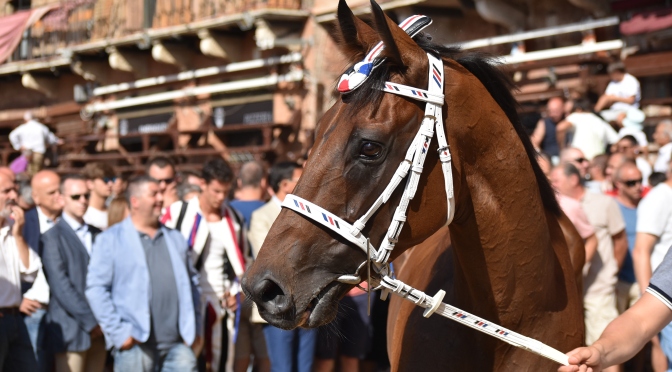 There are events that we experience and we are able to describe and explain, trying to convey feelings and emotions so people that have not attended them can get as close as they can to the situation.

And then there is Palio.

I thought I could actually describe Palio (and I tried, with my two previous posts) but the reality is that, for much details and information you provide, no one can really explain the essence of Palio.

I am not from Siena and I have moved to the area very recently so I definitely have no presumption on this subject but I know one thing: as soon as you step in Piazza del Campo on the Palio race day and you lift your eyes to the balconies, the windows, the roofs or any other opening, jammed with people flagging the contrada colours, you cannot feel anything else than tension. Multiply that for a thousand times and I think you can get a rough idea of what contradaioli experience during the Palio days – better said, throughout the whole year.

One the day of the Palio (July 2nd and August 16th) the historical parade goes on for a time that feels almost interminable, just adding more suspense and expectation to the race itself.

Then the Palio (a silk hand painted drape, dedicated to the Madonna di Provenzano in July or the Assumption of Mary in August) enters, greeted and waved by thousands; at the end of the day that is why everyone is gathering in Piazza del Campo twice a year.

When the last access to the square from Via Dupre’ is closed (usually half an hour before the race starts), that’s it: you are locked in.

At that point the square is still noisy and constantly moving, people trying to gain a good spot for a better view particularly of the Mossa area, where fate is decided.

As soon as the white envelope containing the starting order appears and goes from the Mossa down to the hands of the Mossiere, the square suddenly fells to a surreal silence. If there is still someone chatting, people will immediately shout for silence.

The starting order is called out by the Mossiere, accompanied with the usual cheers or boos from the crowd (and plenty of swearing too), depending on whether their contrada is next to an ally one or a rival.

At this point, the die is cast. Being a good jockey and having a good horse is not enough. Strategies, silent agreements, threats and bribes play an equally important part (have a look at my previous post for more details).

The run-in horse gives the start to the other 9 and, unless the Mossa (the start) has to be repeated for irregularities (which happens often, and more than once), 90 seconds is all the race lasts.

Imagine a whole year condensed in these 90 seconds and you might be able to understand what follows….

What happens next is even more striking. The winning horse (and the jockey) gets literally sucked in a flow of people that, with the horses still running, climb over the fences, frenzied and I would say almost possessed. The winning horse is kissed and profusely hugged and the jockey is lifted above the crowd and he will stay there for few hours, carried around the city and brought up to the Duomo (in August). 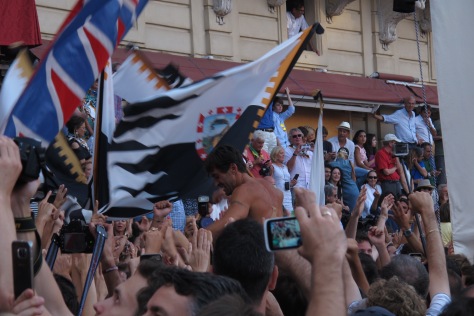 In the meantime in the square you will see a bit of everything: people screaming and throwing themselves to the ground being literally dragged out by their friends (because their rival contrada won), people crying of joy and restlessly hugging other contradaioli around because their contrada won two Palio in a year (La Lupa, this year), people rushing to the fences, falling down and pushing as fast as they possibly can to reach the winning horse/jockey….

And the Palio? Those that have not rushed to get the jockey up in the air have literally climbed up the Mossa to get the Palio down. The Palio is then taken on a procession (with the jockey) to the Duomo, through the streets of Siena and then to the tiny church of the winning contrada where its contradaioli (and not only them) pay respect. Pictures, selfies, smiles and plenty of tears, again.

Still think that this is just a 90-second horse race…?

11 thoughts on “A 90-second horse race that lasts forever”