As with anything: the more the better… Andalucía would probably need at least a good month touring around but if you have got just a week off and you are prepared to do a bit of driving, it’s still a great destination, especially in early Autumn or Spring when the weather is still warm and you can enjoy the main cities avoiding the massive summer crowds and the unbearable heat. Andalucía gets truly hot in the central summer months, making it almost impossible to walk around cities like Sevilla or Cordoba so I wouldn’t advise to visit in summer (unless you plan to stay on the coast for the majority of your trip). March, April and May in Spring and September and October in Autumn are – in my opinion – the best months to visit this region.

May deserves a separate note since 3 different celebrations are held in this month: May Crosses Festival, Patio Festival and Cordoba Fair and this obviously has an impact on the amount of tourists visiting the town. If you decide to visit in this month you will have great photo opportunities but, as always, prices will be higher than normal and you will need to book well in advance.

If you only have 8 days/7 nights and want to get a good glimpse of Andalucía, be prepared to having to drive a fair bit. The good thing is that, as all over Spain, Andalucía lives until late: shops and museums stay open until late, restaurants serve food until gone midnight so if you live like a Spaniard for a few days you can actually make your day last a lot longer.

Here is a tentative itinerary:

Day 1. Málaga-Granada (130 km). Land in Málaga and hire a car from the airport. Roads are pretty good and it’s very easy to get out from the airport and start your journey into Andalucia. If it’s only the two of you for a 1 week on-the-road-trip, pack light and rent a small size car (it will be cheaper and a lot more practical to move around in the narrow town streets). We used Sixth Car and we were happy with them, particularly because they didn’t charge the drop off fee for picking up in Málaga and returning in Barcelona (very useful if you plan to land/depart from different airports). In Granada, I stayed at Párraga Siete, a nice and very reasonable hotel downtown, a quick walk from the main sites. Just for being nosy, after eating in their restaurant, I had a look at the rooms of AC Palacio de Santa Paula and they were really nice and very well appointed; replacing an old convent, the setting is gorgeous with a beautiful courtyard where you can dine (during the warm season). Unfortunately when we visited it was raining so we couldn’t take advantage of the outdoor area but the meal and the service were spot on. Spend the afternoon walking Granada, visiting the historical centre with the majestic Cathedral, the Albaicín (declared World Cultural Heritage by UNESCO in 1994) and the Sacromonte neighbourhoods.

I have been to this UNESCO heritage site 3 times in my life and every time it has been absolutely stunning, even when it was pouring with rain :-(. Don’t rush and take your time to visit the magnificent palaces and the gorgeous Generalife gardens. Book well ahead and remember: no matter what time of the year you book, La Alhambra will always be busy. Spring is probably the best time of the year to visit with the blossoming gardens. Even though Granada is only 1 hour drive to the coast, because of its proximity to the Sierra Nevada mountain and its height (738 metres above the sea level), it does get cool and breezy so come prepared.

Day 3. Granada-Cordoba (200 Km). A bit of a drive but Cordoba deserves of course a stopover. Spend the day visiting the stunning Mosque/Cathedral of Cordoba (access is free early in the morning) 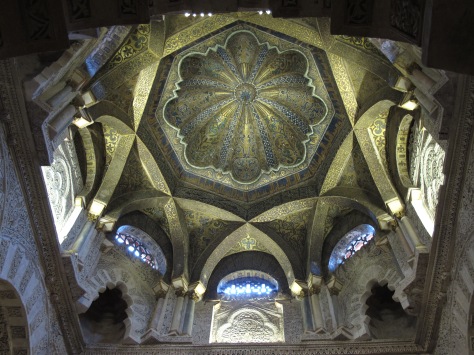 and its Patio de los Naranjos (Oranges Courtyard) and get lost in the beautiful white narrow streets of the historic town dotted with blossoming flower pots (Calleja de Las Flores). 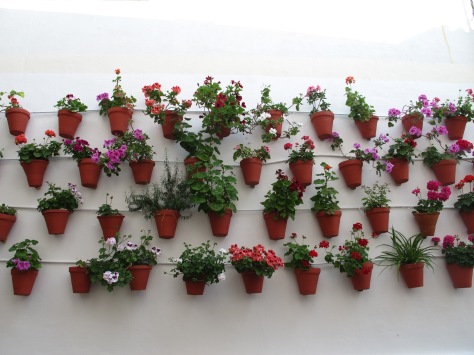 Walk over the Roman Bridge to get a good glimpse of the city. Cordoba is a mix of Arab, Christian and Jewish culture and it’s all reflected in its architecture, its people and its varied food. After a long day driving and visiting, treat yourself to a late Arab bath at Hammam Al Andalus. Your body will thank you! You can find this Arab bath in Granada as well, in case it can fit better with your journey plan (maybe after the visit to La Alhambra?). I tried the Granada one and it was excellent.

Day 4. Cordoba-Sevilla (140 km). Sevilla is a true gem so be prepared to be gobsmacked. Too hot in summer to be enjoyed (it’s the hottest major metropolitan area in Europe), it is a its best in Spring and Autumn.

The Expo ’92 gave Sevilla a massive tourist push, making the city one of the most visited in Spain. Sevilla would probably need a full week to be appreciated and to enjoy its exciting night life  but if you’ve just got a day and half, concentrate yourself on the main sites. The Cathedral with the Giralda, the Alcazar and its gardens, Plaza de España, Metropol Parasol etc. You might be knackered by the afternoon, so get back to your hotel for an hour of proper siesta and go out to eat not early than 10 PM. It may sound far too late (especially for an English or an American) but if you want to get the atmosphere and the andaluz vibe, you have to make an effort and try to get used to their lifestyle.

Day 5. On your 5th day, have a bit of a lay in and don’t hit the streets too early. Visit whatever you have left to do in Seville and then make sure you have a seat booked at La Casa de La Memoria for a flamenco show.

The last time I visited Sevilla was in 2013 and I still remember how this show impressed me (I was literally in tears and goosebumps). Make sure to get there early, so you can get a good spot.

Day 6. Whatever you do next, it will depend on whether you are happy to do a bit more sightseeing or just want to relax for a couple of days on a beach before flying back. I choose the latter (since I had already visited Andalucía extensively and I needed to warm my bones a bit!) so I decided to head to a place called Caños de Meca. On our way down (it’s just over 2 hours from Sevilla), we stopped at El Puerto de Santa Maria, where we actually spent one night. Spain doesn’t get more Spanish then this…you will see.  Though I personally think it doesn’t require a 1 night stopover (especially if you have only 7 nights available), it’s particularly interesting for those Sherry lovers to visit the Osborne cellar and to get excellent fried fish (and more).

We had a quick lunch at Romerijo and unfortunately we couldn’t eat in one of the restaurant that I had bookmarked, El Faro del Puerto. It is supposed to be truly excellent so if you can book a table, do it! And then let me know how it was 😉

Caños de Meca is probably one of the strangest seaside locations that I have visited. Once land of big investments, it got stuck with the economic crisis that hit the world (and severely injured Spain… which has not recovered yet): plenty of buildings would need refurbishing, a lot of them looking abandoned, streets were not particularly clean when we visited…so, why going there?

Because – out of season – it is an amazingly peaceful place with gorgeous long sandy beaches (don’t expect any sunbeds, as far as I remember), gorgeous views and a stunning coastline rich in vegetation (the Breña and Marismas del Barbate Park is the second largest coastal reserve in Andalucía). The water is amazingly clear, the beach was surprisingly empty (end of April) and the water was not too cold to allow us a couple of (brave!) good dips. When we got there, it truly felt like what Formentera used to be (see my full post on this amazing island): wild and peaceful. If you decide to visit Caños de Meca, be prepared to change your mindset (even though by now it should already be adjusted to the andaluz style!) 🙂 because you have just arrived in a very laid-back and easy-going town: here nobody will rush. Why rushing? Accommodation in town was generally quite basic; since it was a special occasion, we decided to stay at a place called La Breña, a few steps from the beach in a loft room with views of the Mediterranean sea. Their restaurant was very good as well (a kind of variation on the typical Spanish menus, still being very local) so I would recommend both the hotel and the restaurant. We were surprised by the lack of tourists (and very happy for that!) but the locals confirmed us that Caños de Meca does get jam-packed in summer and services that can’t cope with the amount of visitors. Therefore, I would strongly recommend to visit before/after peak season.

Day 7. Spend your full day on the beach. No need to give you any tips here, just chill out, enjoy the views, have a walk up to Trafalgar Lighthouse and then get back just on time for a drink watching the sunset.

Day 8. If you are flying out from Málaga, allow plenty of time to get to the airport (at least 3 hours). Our sat nav didn’t work (or I didn’t put the destination properly… more likely) and we ended up racing like maniac down the country lanes (it felt wrong but we kept going until we realized it was very wrong). And we almost missed the flight…

Don’t fancy driving? You can do almost everything of the above (except Caños de Meca) using Spanish trains (Renfe) or buses. Spanish trains are reliable, relatively modern and save you the hassle (and the cost) of the car but of course you loose a bit in flexibility. From Málaga, you can reach by fast train Sevilla (2,30 h) and Córdoba (1 h) and Granada by bus in 1,30 h. Málaga is also 2,45 h from Madrid, therefore flying to Madrid and catching a train connecting to Málaga is an option too.

Of course you will have left Andalucía without seeing plenty of wonderful town and villages but you have got the excuse to come back. Málaga, Ronda, Antequera, Estepona, Cádiz, Baza caves…there is plenty more to come back and plenty more to write on!